The purpose of reality shows is to one, show the reality of the individual(s) and two, entertain. There are a couple of shows that have gotten a negative response from the viewers as well as certain demographics. Some viewers, mainly a few from the African-American community, felt that VH1’s “Basketball Wives: Miami”  and Bravo’s “Housewives of Atlanta” portrays black women in a negative light. Despite all the petty catfights and drama, these women can say they have a name from themselves outside of the show and brought entertainment that kept the shows ratings increasing season by season. For celebrities, reality shows have become the new trend  and many have jumped on board from, T.I with “Family Hustle“, Keyshia Cole with “Keyshia and Daniel”, La La Anthony, wife of New York Knicks Carmelo Anthony with, “La La’s Full Court Life”,  and the newest hit series “Love and Hip Hop” which features different artist and producers in the music industry. The reason celebrities to go down the path of doing reality television could be promotional purposes or just to simply let their fans in on a more personal side. For some, theirs endeavors have been successful, others…not so much. 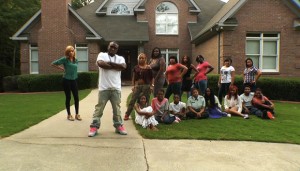 arlos Walker, also known as “Shawty Lo”  is an  underground rapper from Atlanta,GA that has decided to jump on the reality train and team up with Oxygen for his first reality show, “All My Babies’ Mamas”. The show is supposed to capture the lives of Shawty Lo and all ten of his baby mothers. Yes, all ten. When word got around about the production of the show, it raised eyebrows and also rubbed a lot of people the wrong way, including the Parent Television Council. The PTC is so outraged they stated that if the show was to premiere, they are threatening to boycott. They feel like the show is “grotesquely irresponsible and exploitive”. In addition to a boycott, a writer by the name of Sabrina Lamb has started a petition which already has over 20,000 signatures.

With that being said, it seems like the odds are against Oxygen and the airing of the show. The ultimate direction that the Oxygen network were trying to pursue is just like any other project which is to entertain. unfortunately, the whole dynamics of the show just overrides that. It shows the lack of respect that these women have for themselves for wanting to be publicly categorized as one of Shawty Lo’s “baby mamas”. Also, there are a lot of things on TV that may not be the best projection of what our young boys are supposed to be, but the show would just project that it’s “ok” to have kids with more than one women, which is one of the PTC main concerns. Having 10 “baby mama’s” and 11 kids is nothing to be glorified, nor televised.

Hey! My name is Q. T'Lena and welcome to my blog, Be.U. To find out more about me and the site, look under, "The Creator" and "About Be.U"